Competition for urban-architectural solution of the New Belgrade bus terminal and railway station and the business-commercial complex in Block 42, New Belgrade

The solution for distribution of traffic flows from the bus terminal is based on a single main road and roundabout between Antifašističke borbe (Proleterske solidarnosti) and 2a - 2a streets. Antifašističke borbe street is a class 1 street with 2x3 traffic lanes, sidewalks on both sides, and a tramway track area in the center of pavement. Connections to this street are designed as merging/diverging lanes.

The street connecting Jurija Gagarina and Đorđa Stanojevića (2a – 2a) streets belongs to class 1 streets, with 2x3 lanes, and sidewalks on both sides. These streets provide a full range of connections (controlled by traffic lights).

All bus flows in the zone of access to platforms are in a one-way traffic regime.

Platforms for commuter traffic (lines to Smederevo, Mladenovac, Lazarevac…) are designed for articulated buses used on these lines.

Platforms for departures are provided with heated waiting areas; the boarding areas are covered providing for maximum comfort. The building is organized on two above-ground levels and a small underground level that serves for connection with platforms. The top upper floor has a light skylight and a terrace with a summer garden.

Platforms for arrivals are designed to receive 14 buses at a time, while the capacities can be extended by three more platforms by relocating the taxi stand.

These platforms are fully covered with canopies to ensure maximum comfort to arriving passengers and people waiting for them, even while taking over luggage from the luggage compartment. The platform area is also designed to accommodate a restaurant, a public toilet, a bus reception organization facility, and an info-desk.

70 garage spaces are provided in the preparatory platform area, along with two bus wash and servicing points, with shops selling spare parts and equipment, and buildings for control, maintenance, and rest areas for bus drivers. Preparatory platforms are covered with canopies matching in style with the rest of terminal.

The railway station is designed so as to harmonize the new solution with the existing railway station facility in the most reasonable way. In addition, it is easy to adjust to the announced addition of more tracks. The structure is modular, leaving room for phased construction in line with current needs.

Facilities for passengers are created by glazing a part of the existing overpass, including the provision of necessary insulation, which is not a problem for the roof, particularly given the planned increase in the height of platforms in line with standards for usage by persons with special needs. This also makes savings in their construction. Each of two reception buildings can accommodate up to 46 counters for all purposes, office space for the railway station operations, space for travel agencies, kiosks, fast food restaurants and toilets.

All platforms of sufficient width are used for reception of passengers, while two service platforms of small width are planned for installation of the new roof structure. Vertical communication is ensured by conventional stairs, mostly for descending, ascending escalators and lifts for persons with special needs.

The platform area is closed with a glazed façade as much as possible, to reduce the effect of winds, which is a very pronounced problem in the existing station due to its position 10 m above the ground level. An additional problem is the fact that the direction of tracks matches dominant directions of winds on this site. For these reasons, the platform areas are closed as much as possible, only with openings for trains left at their ends, while the canopy ends are designed as arches going all the way down to the platform level to redirect winds blowing into the façade away from platforms and over the station. This reduces substantially the amount of wind blowing into the platform area, because even the gusts that would enter this area through passages would lose their intensity being distributed to a larger space. Additional decrease in intensity, if needed, can be achieved by installing a ventilation duct near the train passage to direct the part of winds forced by the façade over the roof to collide with the wind that would enter the platform area, thus preventing it from passing through. The roof offers sun protection from the south and provides diffuse light from the north, which is not eliminated even in winter by the snow cover due to a steep grade that makes it slide off.

There is a total of 296 open-air parking spaces provided in the zone of the bus terminal. Users of the railway station, public transport stops and other facilities in the immediate vicinity are provided with 388 parking places for passenger cars under the building structure.

When defining parking places and taxi stands, we tried to disperse the locations as much as possible and locate them as close to users as possible, provided that each parking area is within 100-150 parking places in size, for simpler and faster communication (entrance - exit from the parking area), since these are high-frequency parking areas (and high concentration is not desirable).

Commercial-catering complex and business blocks have smaller parking areas on the ground surface and big underground garages, in accordance with the needs of their users. Underground garages are all organized on the same level, to avoid entering the zone below the groundwater table.

Vehicular access for users of the bus terminal (departure platforms) is provided as a one-way flow from 2a – 2a street with pick-up & drop-off bays on both sides in front of the terminal building.

In addition to the existing public city lines (tramway and bus) and the planned subway, traffic areas for access, terminals and stops for at least 6 new public transport lines to serve facilities at the new bus terminal and railway station are designed within the zone between the railway station building and the inner ring road (UMP) and outside of the railway right-of-way.

There are proper pedestrian paths to interconnect all planned facilities and also to connect them with the existing and planned public transport stops.

All suitable free surfaces are designed to be planted with greenery, the areas along primary pedestrian paths and parking areas are to be provided with shade by planting deciduous saplings.

All facilities at the bus terminal can be executed as a separate phase, with or without terminals for new bus lines. Platforms are designed as modular, so they can be constructed in phases, if needed.

The railway station, too, can be constructed in two phases, which is, also, a preferable solution. The first phase would be construction of a building for reception of passengers along Antifašističke borbe Street, and a 250 m long platform canopy. The second phase would be implemented once the subway station is constructed under the railway overpass near Đorđa Stanojevića Street. Then the second building for passengers would be added, to cover the exit from the subway station, and the platform canopy would be extended modularly up to the new building.

Primary characteristics of the areas covered by this competition is their extremely pronounced traffic function, causing the solution to be defined with maximum consideration of functionality, rationality, environmental standards and aesthetic values.

The aesthetic aspect of the stations, as buildings, is motivated by the rippled surface of the rivers on whose banks Belgrade lies. The mentioned motif is used to visually integrate the bus terminal and the railway station. The business buildings facing Jurija Gagarina Street are fitted into the post-modern architectural style of the adjacent business park in Block 67. Commercial buildings in Milutina Milankovića Blvd. are designed as modern, minimalistic, which is typical of New Belgrade, also featured by buildings in Blocks 28 and 23 and the Super Vero building on the opposite side of the street.

All buildings are designed with natural lighting in mind, wherever possible. Therefore, roofs and canopies on the bus terminal and railway station buildings, because of their large surface areas, are sloped to the north and glazed. Their northern orientation eliminates the greenhouse effect in summer. The south-oriented sloped roof is covered with sheet metal, and the slope is adjusted for installation of solar panels, or sanitary water heating, since the orientation of the railway station and the bus terminal makes their roofs particularly suitable for both options. It is possible to achieve 95% utilization of photovoltaic panels, yet their installation is optional.

The buildings of the bus terminal and the railway station are steel structures, mostly glass-clad, which makes any replacement or removal cheap and highly recyclable. 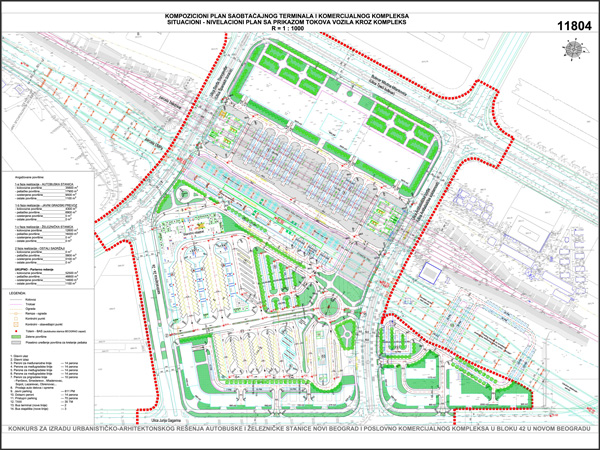 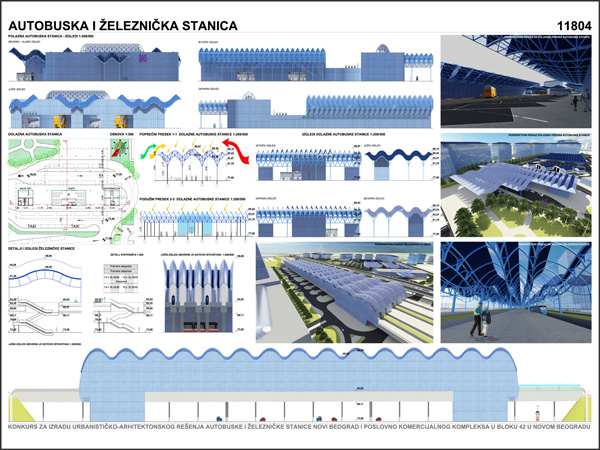 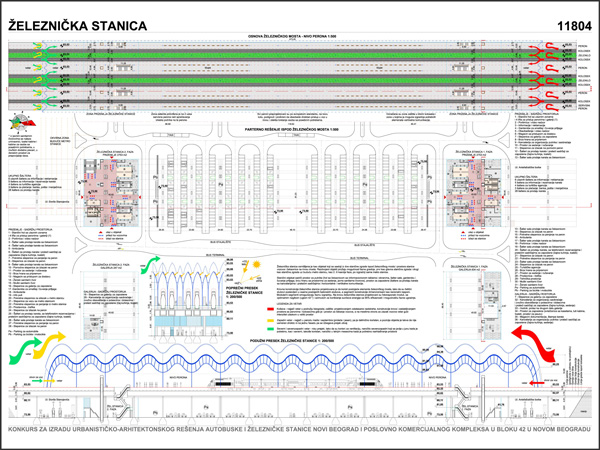 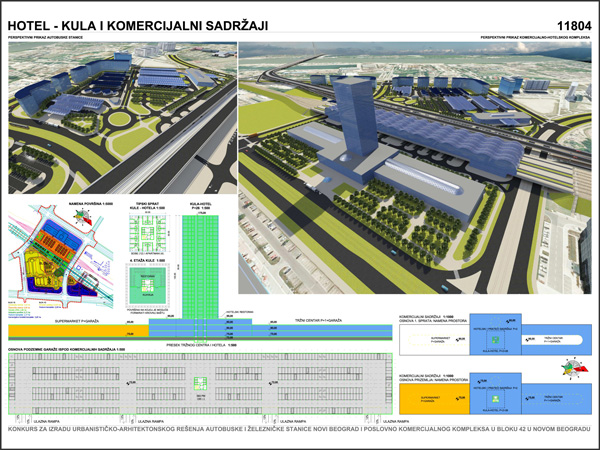